Some of the National Archives’ finest footage of the bombardment and sinking of World War I-era ships dates from after the war. In 1921, 1923, and 1931, the United States Navy, in cooperation with the Army Air Forces, bombarded American and German vessels with bombs ranging in size from 25 to 2000 pounds. These spectacles were the brainchild of Brigadier General Billy Mitchell, who believed so enthusiastically in the superiority of air over naval power that his disparaging remarks about top brass ultimately got him court-martialed. The Navy and Army thoroughly documented the bombings and sinkings with multiple cameras shooting from sea and air, creating some compelling silent presentations.

All three films featured in this blog post include footage from the dramatic sinking of the SMS Ostfriesland on July 21, 1921 off Hampton Roads, Virginia. Each film also contains footage of the barrage on at least one other ship. (See list below.) The Ostfriesland saw extensive action during World War I, including at the Battle of Jutland. Following her cession to the United States, she was recommissioned as USS Ostfriesland, only to be decommissioned later that year in New York City.

Ships other than Ostfriesland depicted in each film:

Some of the ships in the trial bombings did not sink completely and were later sold for scrap. Such was the fate of USS Alabama and USS Pennsylvania. The other ships remain at the bottom of the Atlantic. Ostfriesland and her sister ships are now a dive site and have been surveyed by NOAA.

The three films contain different edits of these events, mostly with explanatory intertitles. The titles to all of 428-NPC-12955 and only the Ostfriesland segment of 428-NPC-3250 explain the planes and bombs used while 111-H-1119 also highlights important figures such as General Mitchell and shows observer ships and more detailed views of the planes. The films contain excellent cinematography, including this shot from 111-H-1119 in which the camera plane crosses the field of a smoke screen.

The unrelated footage from 428-NPC-12995 happens to include another striking visual of a flying machine passing through a smoke screen. In this case, is it USS Los Angeles (ZR-3). Los Angeles was a Zeppelin given to the United States as German war reparations. Unlike the quickly-sunk Ostfriesland, Los Angeles remained in use by the Navy until 1939. 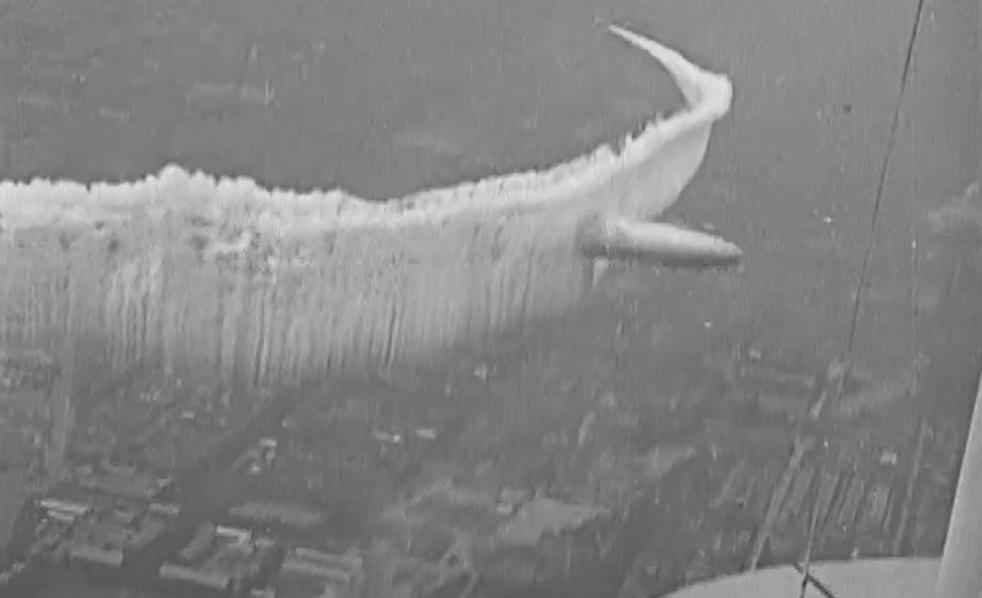